A strange birth has occurred at Ampiaw-Ajumako in the Ajumako Anyan Essiam District of the Central Region.

A woman has given birth to a baby without a completely formed head, making the eyes and some important facial features of the baby missing.

The entire head of the baby appears to contain a watery substance mixed with blood with its nose being the only identifiable feature on its face. 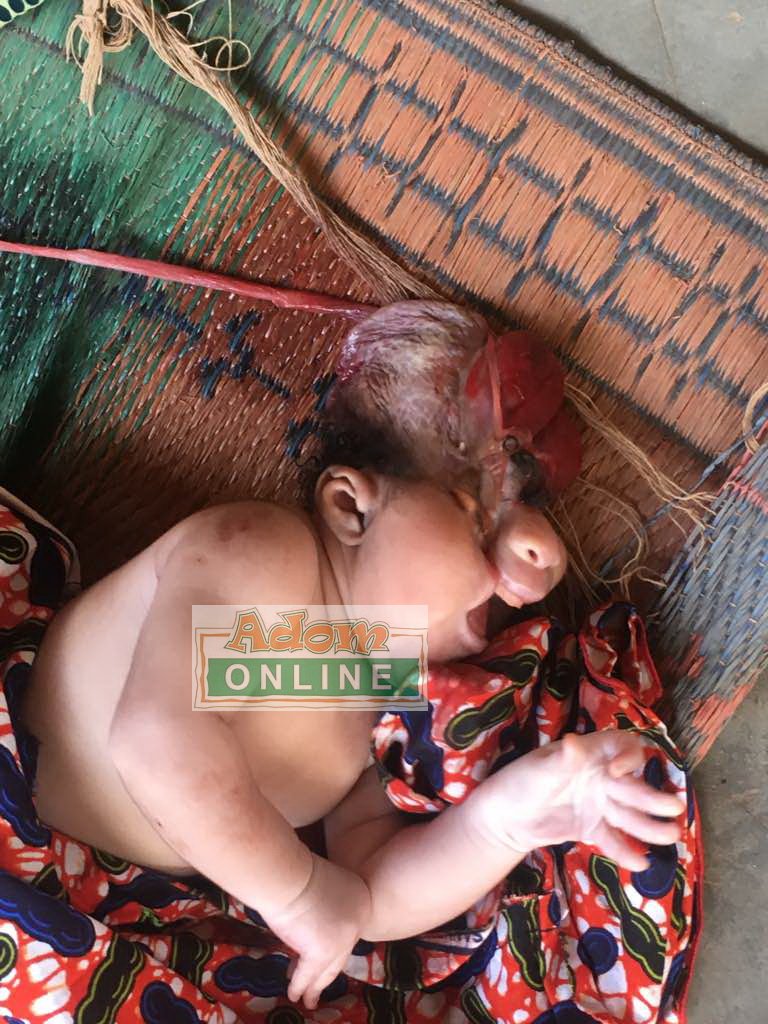 According to the father of the newly born baby, Eric Antwi, virtually the entire community rushed to their house to catch a glimpse of the mysterious baby.

“It is true the baby was born,” Mr Antwi confirmed to Adom News with shock still visible on his face.

He also confirmed that the baby has since passed away, adding that it would’ve been a challenge to try to correct the defect.

“I’m happy the baby had finally died, because, I don’t have enough money to treat the huge medical condition if the baby had survived“.

28-year-old mother of three, Comfort Adjetey who gave birth to the baby in question expressed worry about the situation.

“I was shocked to the marrow when I saw my baby without complete head after going into labour for some hours at home. By the time I delivered my baby, it was alive and crying but I was too scared to breastfeed her so she died after 24 hours of delivery.

She said nurses who came to the scene told the family to feed the baby with sugar and water and they complied.

“I attended antenatal regularly so I’m shocked I gave birth to such a baby” comfort said.

Grandfather of the woman who delivered the baby in question, Abusuapanyin Kwaku Awusi has ascribed spiritual reasons, describing the occurrence as a bad omen thereby promising to consult the gods for an explanation.

“I have never seen such a terrible creature in my life so we helped to pack the dead baby and the placenta and buried it quickly before the media comes in to create problems for us. It was indeed a fearful development and we were saddened by it.

“This is not something we can celebrate so I ordered the parents and other relatives to keep their mouths shut over the incident. I am, therefore very surprised about how you people got to know about it and came here to inquire about it. I do not want anyone to make something unnecessary out of this or create problems for us here,” he stated.

But some medical professionals who were around to see the baby said it could have suffered from a gene mutation, a disorder known as a branchial arch syndrome which occurs in 1.6 out of every 100,000 birth.

The manhood of my husband is bigger than what Ghanaians saw – Wisa Greid’s...

‘The truth often hurts’ – A Plus lauds Arnold for standing up to Shatta...

I’ve been married for over a year now-Afia Schwarzenegger

Statement attributable to the Spokesperson for the Sec.-Gen. – on the...

Power fluctuations will soon be over – Energy Minister