FIFA’s adjudicatory chamber of the independent Ethics Committee has banned former President of the Ghana Football Association (GFA), Kwasi Nyantakyi for life from all football-related activities with immediate effect.

The adjudicatory chamber found Mr Nyantakyi guilty of having violated Article 19 (conflict of interest), Article 21 (Bribery and corruption) and Article 22 (Commission) of the FIFA Code of Ethics, 2012 edition.

Mr Nyantakyi has additionally been fined 500,000 Swiss Francs (over GH₡2.4million).

According to a FIFA statement, Mr Nyantakyi was notified today [Tuesday October 30] about the ban.

The adjudicatory chamber carried out a formal investigation into Nyantakyi after he was filmed apparently accepting a “cash gift” in an undercover documentary titled Number12.

He was initially suspended on June 8 (two days after the premiere of Number12) for 90 days by the Committee.

On September 5, FIFA extended that ban by an additional 45 days.

He was filmed in the undercover investigation by controversial Ghanaian journalist Anas Aremeyaw Anas taking $65,000 (£48,000) from an undercover reporter pretending to be a businessman.

Soon after the ban on June 8, Nyantakyi resigned from the posts he had held with football’s world governing body, Fifa, and the Confederation of African Football (CAF).

He left his role on the Fifa Council and stepped aside from his roles with Caf including as 1st vice-president, the most senior figure at the confederation after its president, Ahmad.

As well as the Fifa suspension Nyantakyi also resigned as president of the GFA on June 8 following an executive committee meeting.

Nyantakyi has always denied any wrongdoing.

Read the entire FIFA statement below; 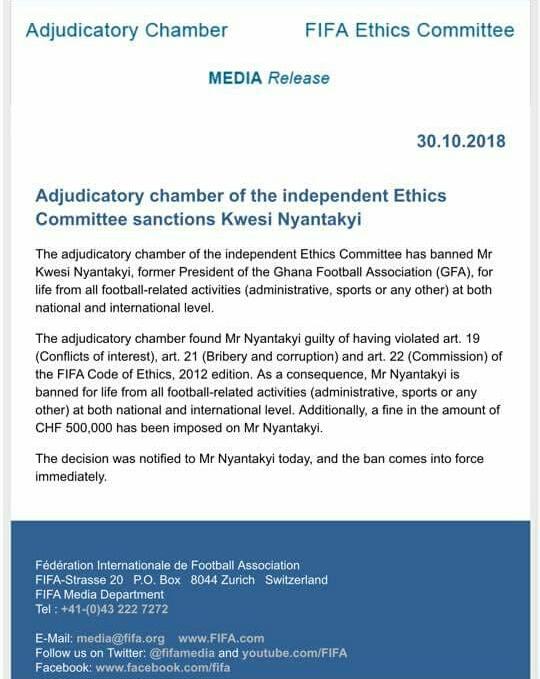 Ahoufe Patri Opens up on Sleeping with Kuami Eugene and Kalybos..

Haven’t found your soulmate yet? Relax! it’s OKAY to be single and not ready to mingle!

I need a guy who will send me good morning and goodnight texts; I...

Mahama signs book of condolence in honour of Prince Philip